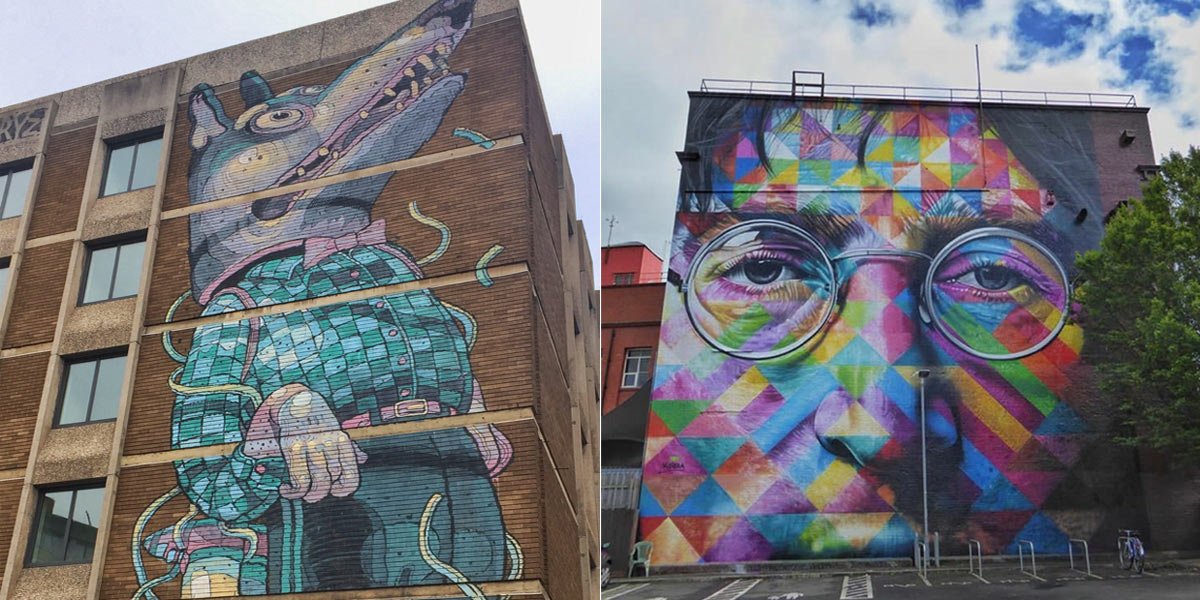 Bristol has so much to offer us all, including one of the best (if not the best) street art scenes in the UK. People may argue that London’s scene ranks up there but the history of our scene speaks for itself. We already host what must be the best annual street art festival, that being Upfest.

My passion for Street art began around 6 years ago, seeing drab parts of the city awash with colour and creativity struck a chord with me. I then did a street art walking tour with Where The Wall. I was lucky that my guide was called John Nation; I now understand that to be a very important name in the development of the original Bristol graffiti scene and modern street art scene as well. Following this tour I never looked back and continued my interest in graff/street art and other urban arts. This led me to set up the instagram page @streetartbristol.

Whilst the art form itself is famously transient and constantly evolving; some pieces of art have stood the test of time. I would put money on you having seen some of the art in the city, but not all; so here is a list of 20 more-permanent works (in no particular order) worth checking out.

One of the longer lasting pieces and one of my personal favourites. Painted by El Mac in 2011 at the See No Evil festival (the predecessor to Upfest), this can be found on Nelson Street, a location that shall be mentioned a few times in this article! The picture is based on a photo of his girlfriend and her niece.

Inkie is one of the main players in the Bristol scene from its infancy, you can find many pieces of his throughout the city but I’ve chosen the piece on the side of the Thekla for its unusual location. His work replaced The Grim Reaper by Banksy in 2014, which was removed from the side of the ship and is on display in The M Shed museum.

Another local guy and early member of the Bristol graff scene alongside people such as 3D from Massive Attack. This can also be seen on Nelson Street from the summer of 2011. It features his character The Vandal.

More large scale art from See No Evil on Nelson Street. Aryz is a Spanish artist who doesn’t do things by half.

To some the work of Stik is more simplistic but it is in no way less effective and it really suits, and unsurprisingly improves, the brutalist building it’s resides on along (you’ve guessed it) Nelson Street.

A global legend in the urban art world, this French stencil artist has a distinct style. He painted earlier in 2017 at an event hosted at The Arnolfini. After this event he went and left his mark on Leonard’s Lane.

I return to Nick to mention a piece that is relatively new to me and may not have been seen by many as its likely only visible for part of the day, it’s on a shop shutter along St George’s Road.

An Italian artist whose mechanical beast piece is on the wall of the NCP car park on All Saints’ Street best viewed whilst stood next to the entrance to The Lanes.

Phlegm is a Sheffield based artist who has a very distinctive style. This piece is the 3rd incarnation to decorate this house on Hillgrove Street in Stokes Croft. Phlegm originally painted something which was then covered over by the colourful wave by MM13 crew. The man from the steel city subsequently returned the following year to add the character on the left and its remained untouched ever since.

Another of the early breed of Bristol artists, who attended Barton Hill youth club with the likes of Inkie, Jody, Shab and some guy called Banksy. This youth club project was run by the Bristol legend that is John Nation. For more on the early days of the scene watch Vandals and Visionaries

(https://youtu.be/9YcV5YxQ_Ck). After taking some time away from the scene; Cheo returned and is one of the best we have. A lot of his work is there for a while then painted over but this piece is there for at least a year and was painted on the side of the Bristol Beer Factory during Upfest.

For me, in the Stokes Croft area there are probably 3 stand out iconic pieces. This being one of them, another I mention later by Stinkfish, and also the piece above the Carriageworks by Sweet Toof, Rowdy and Cyclops. You will find this Breakdancing Jesus on a wall outside of Hamilton House (and whilst taking a photo of it look behind you for a Banksy!)

Jody Thomas was another attendee of the Barton Hill Youth Club graffiti project. It’s fair to say the work he produces for events such as Upfest are always a highlight for many people. The photo here is of his latest Upfest work to be found on The Nursery just off North Street.

A Brazilian artist who painted at Upfest 2017, a real coup for the festival and a sign of the great work the organisers do. Another artist who paints very large scale on high rises across the globe regularly in this colourful fashion depicting a famous face. You can find this one off John Lennon by the ALDI on North Street.

This Irish born artist fuses together both contemporary and classical styles into his own style of art. You can find this piece on Broad Street. I wasn’t sure when I first saw it but yes, the paint drips are intentional!

A brilliant stencil artist from Weston Super Mare. By his own admission he was inspired by Banksy, in particular an exhibition of his he saw in Bristol. This is located on Frogmore Street. As a bonus, if you walk around the corner of The Queenshilling you’ll see another of his works, the gladiator Spartacus.

I hope to inspire you to visit most of these pieces of art but this is certainly one you need to see for yourself. My photo wont do it justice because he has painted the majority of Montpelier train station.

Stinkfish is a Colombian artist who uses found photos as the inspiration for his works. He then paints them in his own, very brightly coloured style. This was painted in 2012 and has remained since, updated recently with the We Love Stokes Croft at the bottom by Deamze.

A highlights from Upfest 2016, can be found at The Pantiles just off West Street in Bedminster.

You can find other paint by Mr Council in numerous locations including North Street, Bedminster, The Oxford pub in Totterdown and some of his most recent work at Ashton Gate alongside Inkie and Voyder.

This collaboration is on boards next to Temple Meads Station which is one of the new spots for artists. You will also find excellent art here by Voyder, Loch Ness, SP Zero, Kid Crayon and Lokey. Well worth checking out.

Related Topics:featured
Up Next

Any cookies that may not be particularly necessary for the website to function and is used specifically to collect user personal data via analytics, ads, other embedded contents are termed as non-necessary cookies. It is mandatory to procure user consent prior to running these cookies on your website.